As Maine's capital region, the Kennebec Valley is teaming with attractions from the State Capitol Complex to museums, statues, and historic buildings. 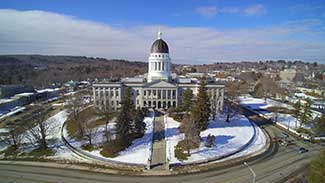 State House Aerial View ©FireDroneUSANoted Boston architect Charles Bulfinch designed the original Maine Capitol, built in 1829 using granite quarried from nearby Hallowell. In 1910, another Boston architect, C. Henri Desmond, enlarged the building to double its original size. It is truly one of Maine’s architectural treasures and recently underwent a $50 million renovation. The dome rises 185 feet over the majestic Kennebec River. The Capitol Building houses both Executive and Legislative branches. Tours are available weekdays only, year-round and scheduled by calling the Maine State Museum. Please call: (207) 287-2301.

BLAINE HOUSE (GOVERNOR’S MANSION)
The Blaine House, located on the corner of State and Capitol Streets, was built in the Federalist style in 1833. In 1872, the motif was changed to Victorian & Italian style, and in 1919, noted Maine architect, John Calvin Stevens, remodeled the mansion to a semi-Colonial structure. A gift to the state from Mrs. Harriet Blaine Beal, the house has been the official residence of Maine governors since 1919. The Blaine House is open for tours by appointment only. Please call: (207) 287-2301.

CAPITOL PARK
Set between the Maine State House and the Kennebec River, Capitol Park was created in 1827 after Augusta residents donated 34 acres of land for the future State House and park. In the 1920s, the Olmstead Brothers were commissioned to design the Governor’s mansion, State House, and park. With wide gravel paths between rows of trees, the park is Maine’s earliest documented designed landscape. Capitol Park was named to the National Register of Historic Places in 1989.

LAW ENFORCEMENT, EMT & FIRE FIGHTERS MONUMENT PARK
These special memorials, erected near the State House, give constant statewide tribute to law enforcement officials and fire fighters who have given their lives in the line of duty.

MAINE STATE MUSEUM
Experience Maine’s past by visiting the Maine State Museum, one of the finest state museums in the USA. The museum presents exhibits of Maine’s natural environment, social history, and manufacturing heritage. Located in the State Capitol Complex, the museum is open Tuesday through Friday, 9 to 5, Saturday 10 to 4, and is closed Sundays, Mondays, and all state holidays. (207) 287-2301, www.mainestatemuseum.org

SAMANTHA SMITH MEMORIAL
In 1982, Samantha Smith, a ten-year old child from Manchester, Maine wrote to congratulate Yuri Andropov on his appointment as Soviet Premier. In her letter, Samantha confided her fears of nuclear war and the tense relations between the United States and the Soviet Union. Later, Premier Andropov invited Samantha and her family to visit the Soviet Union, experience its culture and meet Soviet children. Tragically, Samantha’s voice was silenced in a 1985 plane crash, but her legacy remains a major step in the successful peace efforts between the two super powers. The memorial is located next to the Maine State Museum.

CHILDREN’S DISCOVERY MUSEUM
This exciting Discovery Museum offers a “hands-on” opportunity for youngsters through grade five to have fun while learning in an interactive environment. A host of exciting exhibits, including a restaurant, grocery store and bank, theater and a rainforest/toddler play area. Kids can also learn about engineering, construction and transportation. The museum provides wonderful opportunities for creative family fun and is located at Shaw’s Plaza near Capitol Street. (207) 622-2209, www.childrensdiscoverymuseum.org 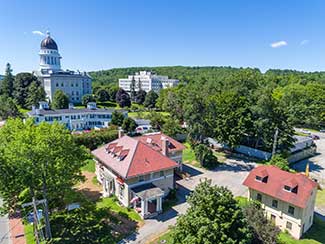 GOVERNOR HILL MANSION
The Governor Hill Mansion was originally designed by John Calvin Stevens for Governor John Fremont Hill. This building incorporates the use of Maine granite and St. Louis brick in its construction. It is the last remaining of the imposing estates of Augusta built during the late 1890’s and early 1900’s and has been converted to conference facilities. (207) 622-6235, www.governorhillmansion.com

HOLOCAUST & HUMAN RIGHTS CENTER OF MAINE
The Michael Klahr Holocaust Education Resource Center, built with the help of the Holocaust Human Rights Center of Maine – and a generous donation by Michael Klahr who survived the holocaust as a child – houses artifacts and information from Maine people who survived or helped to liberate the concentration camps of World War II. In the center, attached to the University of Maine at Augusta’s Katz Library, researchers will find a rich archive of reference material. Klahr Center seminars and symposiums focus on the topics of diversity, medical ethics and the Holocaust. (207) 621-3530, www.hhrcmaine.org

KENNEBEC COUNTY COURT HOUSE
The Kennebec County Court House, located at the intersection of State and Winthrop Streets, was built in 1830. This granite building is a clear example of the Greek revival style of construction. From 1830 to 1969, the Maine Supreme Judicial Court held sessions in the Court House, and the room where they met still contains the original chairs and desks. A $50 million addition was completed in 2015. The Kennebec County Court House is listed in the National Registry of historic buildings. 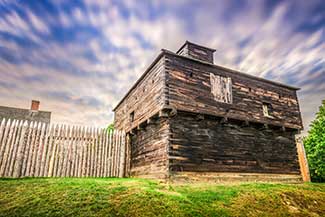 Old Fort Western ©Sean Pavone | DreamstimeOld Fort Western was built in 1754 by the Proprietors of the Kennebec Purchase and is now designated is a National Historic Landmark. It is the Nation’s oldest surviving wooden fort. Located on Cony Street on the banks of the Kennebec River, the Fort complex includes the original main house (barrack and store) and reproduction blockhouses, watchboxes and palisade. The Fort portrays military, settlement, family, work and community themes. Guided tours offer visitors an opportunity to step back into the past. For information on admission and group discounts call (207) 626-2385 or visit www.oldfortwestern.org

THE UNION MEETING HOUSE
Built in 1827-28, the Union Meeting House is a historic brick meeting house located at 22 Church Road in Readfield. When the building was named to the National Register of Historic Places in 1982, it was called “a handsome late Federal style brick church unusually refined for such a rural context.” Forty years after it was built, artist Charles J. Schumacher was hired to create tompe l’oeil style murals on the walls and ceilings. Visitors can see the meeting house today exactly how it was in 1868. www.unionmeetinghouse.org

MAINE VIETNAM VETERANS MEMORIAL
The Maine Vietnam Veterans Memorial, located in Capitol Park, honors those who served in Vietnam and those whose lives were touched by the war. The Memorial is represented by three triangular structures. One can walk through this “statue in reverse” memorial, incorporating the viewer as an integral part of the design.

MAINE VETERANS MEMORIAL CEMETERIES
This sprawling hillside cemetery and nearby expanded pastoral cemetery are the final resting places for thousands of Maine citizens who served their country in time of war. On the outskirts of Augusta on Civic Center Drive and Mount Vernon Road, the Maine Veterans Memorial Cemeteries are designed with walls of names and offer a somber reminder of those who have served our country.

MONUMENT PARK
Prior to 1879, this park was known as the Augusta Mall and was the mustering point for the Kennebec Valley Civil War troops. Following that war, the westside rotary site was conveyed to the City of Augusta in trust for a Civil War monument. Since that time, war memorials have been added for World War I and II, the Korean War, the Vietnam War, and the war in Iraq.

VAN METER MEMORIAL
At age 11, Vicki Van Meter, a Pennsylvanian, became an “adopted daughter” of Augusta when she piloted her plane solo from Augusta State Airport to San Diego, California, setting a record and becoming an international media star, NASA spokesperson and inspiration to youth. She also flew from Augusta in her cross-Atlantic record flight at age 12 in 1994. After her untimely death in 2008 Vicki’s family erected a statue at the airport to commemorate her love for Augusta and to help inspire others to “follow their dreams.”

©Augusta Colonial TheaterBuilt in 1913, the Colonial Theater is located on Water Street in Augusta along the Kennebec River. The building suffered extensive damage in a 1926 fire and was rebuilt shortly after as larger than the original. It featured silent films with live music until sound pictures were introduced in the late 1920s. After 40 years of neglect, a group of community members formed Colonial Theater, Inc., a nonprofit organization, to save the Colonial from demolition. In its heyday, the Colonial was a primary site for entertainment for residents before the age of automobiles, videotapes, and cable television. Today, the theater is in the first phase of restoration that, when opened, will bring cinema, the performing arts, public events, education, a broad spectrum of digital programming to downtown Augusta.
(207) 248-6382, www.augustacolonialtheater.org

JOHNSON HALL
Johnson Hall is a historic theater built in 1864 on Water Street in Downtown Gardiner. It presented live shows, entertainment, and movies until 1959 when it mostly closed for 30 years. The first floor has been renovated into an accessible 117-seat performance space, where Johnson Hall presents arts programs for all ages, year-round live professional music, theater and dance performances, theater and art camps for children, and workshops and classes for children and adults. The upper floors of Johnson Hall await restoration as the community is in the process of returning the Hall to its full glory – a 400-seat theater, providing cultural enrichment and boosting the regional economy. (207) 582-7144, www.johnsonhall.org 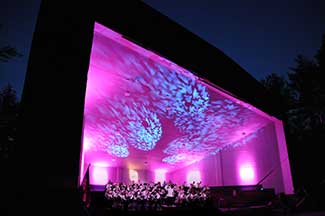 Bowl in the Pines @Snow Pond Center for the ArtsSNOW POND CENTER FOR THE ARTS
Since 1973, talented young musicians have been coming to the New England Music Camp in Sydney, Maine, to experience the splendor of a Maine summer and learn from some of the nation’s top performers, conductors, and educators. Snow Pond Center for the Arts is now pursuing its greater goal to establish a thriving arts education and community center serving central Maine and beyond. SPCA opened a Community Music School in the Fall of 2014. The Arts Education Center provides ample space for musical rehearsals, composition, recording, visual arts, and dance. Maine’s only performing arts public charter school, Maine Arts Academy, opened in the Fall of 2016. SPCA’s Performance Hall includes a state-of- the-art, acoustically engineered, 750-seat concert hall. SPCA is also home to the Bowl in the Pines amphitheater built in 1937, one of the largest outdoor stages in the nation. (844) 476-6976, www.snowpond.org

THEATER AT MONMOUTH
The Theater at Monmouth, aka, The Shakespearean Theater of Maine, is a regional treasure that attracts Mainers and summer visitors from around the world to high quality performances of Shakespeare and others. Since 1970, The Theater at Monmouth has presented professional productions of the world’s greatest plays in rotating repertory in the beautifully restored 100-year-old Cumston Hall.
(207) 933-9999, www.theateratmonmouth.org